A downloadable game for Windows

3> Double click on APT.jar or APT.exe if you've downloaded the _EXE version

APT-AdvacnedPersistentTabby-NoSave.zip - Has this saving functioanlity disabled, in case you don't want the game putting anything in your user directory :)

APT-AdvancedPersistentTabby_EXE.zip - Has saves, and is also packaged into an executable with a bundled JRE in the archive so you don't need to install Java. It's big though.

Cats are the real monsters, and they are out to get us.

Tabby, a super secret cyber agent for the Kitty Liberation Army has a mission: To sit on laptop keyboards in order to prevent humans from doing things they need to do.

Will Tabby succeed? Will humanity pay the ultimate price for it's arrogance?

For those of you that read this far down, there is a super secret level for only most elite of cyber kitty agents. To get to this level, hold the "L" and "D" keys down on the title screen :) 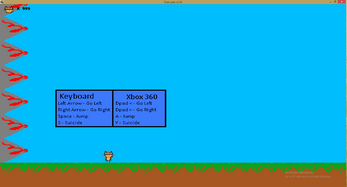